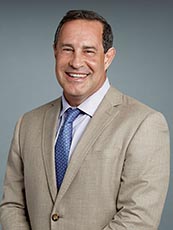 Throughout his career, Dr. Cerfolio has earned a reputation for clinical innovations that have led to practice-changing advances in patient care.

One of the most prolific thoracic surgeons in the world, his development of a new robotic technique yielded improvements in lung cancer surgery that are now practiced worldwide, and which have reduced hospital complications and increased survival rates.

He formerly served as chair of thoracic surgery at the University of Alabama Hospital in Birmingham, where he was also chair of the hospital’s Business Intelligence Committee. He received his medical degree from the University of Rochester, where in addition to excelling in his studies he was a first-team Academic All-American baseball player. He later completed a fellowship in cardiothoracic surgery at the Mayo Clinic.