At NYU Langone, our cardiothoracic surgeons at the Heart Valve Center offer procedures designed to repair and replace faulty aortic valves and reduce your risk of serious heart conditions. 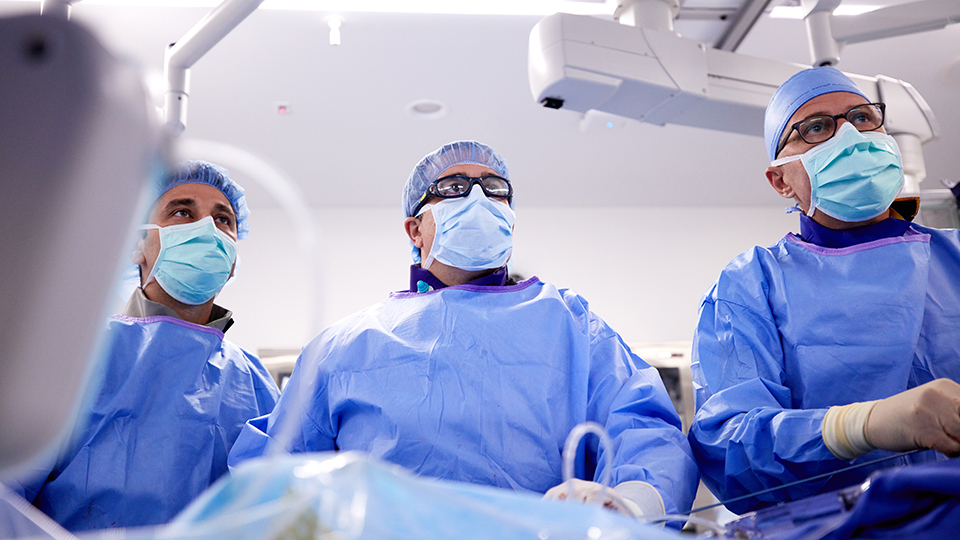 In this open heart procedure, the damaged aortic valve is removed and replaced with an artificial valve made from animal tissue or a synthetic material.

This can be performed in several ways, including the following:

An aortic valve replacement typically requires less than one day in the intensive care unit (ICU) and four to seven days in the hospital. Your doctor restricts your activity for up to six weeks after open heart surgery to allow the bones and muscles time to heal.

Also called the David Procedure, valve-sparing aortic root replacement is performed to preserve the aortic valve instead of replacing it with an artificial valve.

Doctors repair the aortic valve using a synthetic tube called a graft, which is implanted into the aortic root, the part of the aorta that extends from the heart. It can be used to treat severely leaking valves in people with aortic valve regurgitation.

This procedure is most commonly used in people under 60 who have connective tissue disease such as Marfan syndrome or a thoracic aneurysm, a bulge in the aortic root, along with aortic valve regurgitation. This procedure can help you avoid the need for lifelong use of anticoagulant medication, also known as a blood thinner, or additional surgery to replace animal tissue valves, which have a finite lifespan.

In this open heart surgery, your surgeon clamps the aorta and cuts it open. The coronary arteries, which supply blood to the heart, are temporarily detached. A heart–lung machine performs the work of these organs during the procedure.

People who have this procedure typically spend one day in the ICU and five to six days in the hospital. Your doctor restricts your activity for up to six weeks after open heart surgery to allow the bones and muscles time to heal.

Our Research and Education in Aortic Valve Disease in Adults