If you have aortic valve disease, your doctor may recommend nonsurgical procedures to replace or open a damaged valve. Doctors with our Transcatheter Heart Valve Program are among the most experienced in the country at performing transcatheter aortic valve replacement (TAVR).

If you have aortic valve disease, your doctor may recommend TAVR, also known as transcatheter aortic valve implantation (TAVI), which is nonsurgical and less invasive than traditional open heart surgery. TAVR is an option for many people who require aortic valve replacement, including those at high risk and low risk for complications related to open surgery. 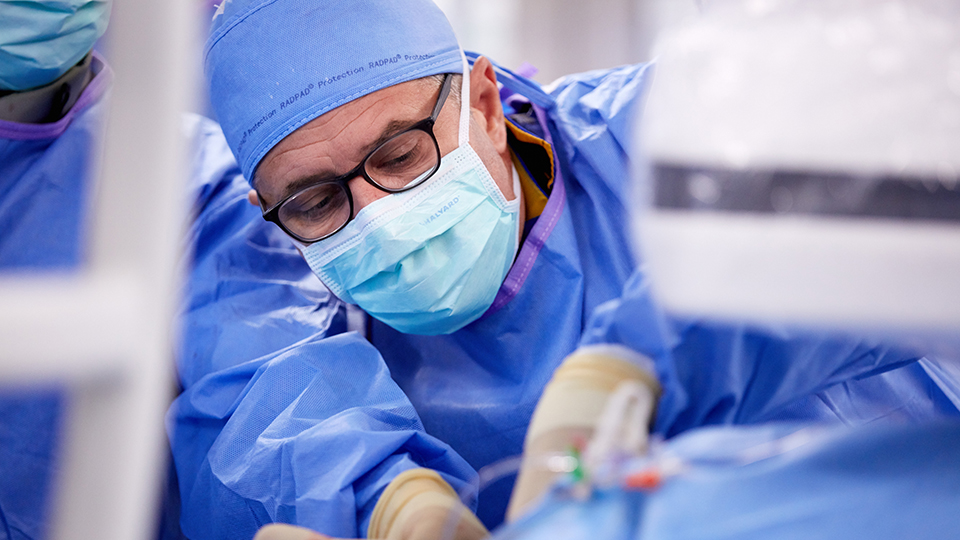 TAVR doesn’t require the heart to be stopped, so a bypass machine, which performs the work of the heart and lungs during surgery, is unnecessary.

Performed with sedation with the patient awake, TAVR typically requires a one-day hospital stay. Though people tend to feel better almost immediately after the procedure, the time required for recovery depends on the person’s overall wellbeing before the procedure.

Occasionally, blockages in the femoral artery don’t allow doctors access to the aorta. If this happens, they may reach the aorta by making a small incision above the breastbone, called a transaortic approach. Alternatively, they may make an incision between the ribs in the left side of the chest, which is called a transapical approach.

TAVR may also be used when valves implanted during previous surgeries stop working. Our specialists can use a valve-in-valve procedure in which a valve made of animal tissue is placed directly in the failed surgical valve. It’s then anchored onto the damaged aortic valve to restore normal blood flow.

In aortic balloon valvuloplasty, which is performed under local anesthesia and, sometimes, sedation, doctors open the narrowed aortic valve with a special balloon. This procedure is recommended for some people who are not candidates for TAVR, or occasionally people who require other urgent surgical procedures.

First, doctors insert a hollow wire into a blood vessel in the groin or arm through a catheter and then thread it to the aortic valve. The wire is guided by X-ray imaging, and a contrast agent may be injected to help your surgeon view the aortic valve more clearly.

Then doctors thread an expandable balloon at the end of the catheter through the vessel to the aortic valve, where it’s expanded to separate and stretch the valve’s leaflets. The balloon is then deflated and removed through the artery.

The procedure requires an overnight stay in the hospital, and recovery takes a few days.

Our Research and Education in Aortic Valve Disease