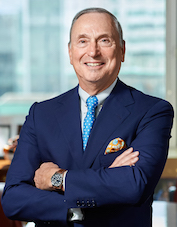 Robert I. Grossman, MD, is one of the world’s premier healthcare leaders, best known for overseeing the evolution of NYU Langone Health into one of the top academic medical centers in the nation.

As chief executive officer of NYU Langone Health and dean of NYU School of Medicine, positions he has held since 2007, Dr. Grossman leads more than 45,000 employees, students, and noncompensated faculty across 6 inpatient locations and over 320 sites throughout the New York City region and in Florida.

NYU Grossman School of Medicine, which was renamed in his honor in 2019, has trained thousands of physicians and scientists who have helped to shape the course of medical history since 1841. Dr. Grossman led the historic and unprecedented initiative of providing tuition-free medical education for all current and future students in its MD degree program. He also curated a new approach to medical education, called Curriculum for the 21st Century (C21), which emphasizes clinical training from the beginning of medical school and includes a revolutionary three-year MD program for select candidates. Most recently, Dr. Grossman was the driving force behind the creation of NYU Long Island School of Medicine—a partnership between NYU and NYU Langone Health—offering full-tuition scholarships with an accelerated three-year curriculum exclusively devoted to training primary care physicians.

In collaboration with the Board of Trustees and institutional leadership, Dr. Grossman increased NYU Langone’s revenue from $2 billion in 2007 to $10.7 billion in 2022, and more than $4.5 billion in philanthropy has also been raised. Also of note, NYU Langone’s National Institutes of Health (NIH) 2021 research awards totaled $815 million—an increase of more than 532 percent compared to 2007.

Early in his tenure, Dr. Grossman launched a major campus transformation that resulted in the addition of more than 13 million square feet of clinical, educational, and research space across campuses in Manhattan, Brooklyn, and Long Island. Of note was the opening of a new Science Building, Kimmel Pavilion, and Hassenfeld Children’s Hospital at NYU Langone.

Each year, NYU Langone Health and NYU Grossman School of Medicine are recognized by outside accreditation entities for providing outstanding care, including U.S. News & World Report’s “Top Hospitals” and “Best Graduate Schools;” the Center for Medicare and Medicaid Services; the Leapfrog Group; Vizient, Inc.; and more.

In 2018, Dr. Grossman was named to Time magazine’s inaugural Health Care 50 list of the 50 most influential healthcare leaders who changed the state of healthcare in America, together with Ken Langone, chairman of NYU Langone’s Board of Trustees. Additionally, he was named a “Living Landmark” by the New York Landmarks Conservancy in 2013 for his leadership in the aftermath of Hurricane Sandy, which caused unprecedented damage to NYU Langone’s facilities and required the safe evacuation of 322 patients. Recently, Dr. Grossman’s pivotal leadership at NYU Langone was chronicled in William A. Haseltine’s book World Class: A Story of Adversity, Transformation, and Success at NYU Langone Health.

A prolific and highly respected scientist, Dr. Grossman was awarded the Javits Neuroscience Investigator Award by the NIH in 1999 for his work on multiple sclerosis. He was a member (1995–2000) and chairman (1997–2000) of the Diagnostic Radiology Study Section at the NIH, was appointed to the NIH’s National Advisory Council for Biomedical Imaging and Bioengineering (2003–2007), and, in 2004, became the first recipient of the Outstanding Contributions in Research Award, given annually by the Foundation of the American Society of Neuroradiology in recognition of lifelong accomplishment and consistent excellence in clinical neuroscience.

In 2010, he received the International Society for Magnetic Resonance in Medicine’s (ISMRM’s) Gold Medal for his pioneering research in magnetic resonance in medicine and biology. In addition, he received the Lifetime Achievement of the Emeritus Class from Tulane University (2019), was named a Distinguished Graduate of the University of Pennsylvania School of Medicine (2010), and was awarded an honorary doctorate from the University of Bordeaux, France (2010). Most recently, he received the American Society of Neuroradiology (ASNR) Gold Medal for his contributions to the field of neuroradiology (2021), and was elected to the American Academy of Arts and Sciences (AAAS) for excellence and leadership (2022).

Dr. Grossman is a passionate educator and widely published scholar. He has trained more than 100 fellows, many of whom occupy prominent positions worldwide, and has authored 339 publications and 5 books, including Neuroradiology: The Requisites.