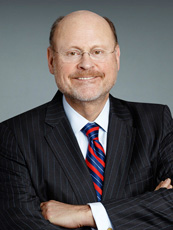 Joseph Lhota, executive vice president and vice dean, chief of staff, is responsible for helping to further align and integrate medical care, research, and education at NYU Langone Health. Mr. Lhota assists NYU Langone’s dean and CEO in managing all activities associated with directing a complex academic medical center, and serves as an advisor on issues of management and policy related to the strategic direction of the organization. He also serves as a representative and ambassador to external constituents, including government and elected officials. Additionally, he oversees emergency preparedness efforts to ensure business continuity plans are developed throughout the entire medical center.

Mr. Lhota brings more than 35 years of managerial and policy-making experience to the position. Most recently, he served as the chairman of the board and chief executive officer of the Metropolitan Transportation Authority (MTA), before resigning to run for mayor of New York City in 2013. Prior to the MTA, he served as executive vice president of administration at The Madison Square Garden Company (MSG), responsible for achieving MSG’s overall growth strategy. Additionally, between 2002 and 2011, he held several positions within Cablevision Systems Corporation, including executive vice president of corporate administration.

Mr. Lhota was also an integral part of Mayor Rudolph W. Giuliani’s core management team in New York City. From 1998 to 2001, he served as deputy mayor for operations, overseeing the day-to-day management of the New York City government. Prior to this, he was New York City’s director of office of management and budget with responsibility for managing New York City’s $36 billion operating budget and $45 billion capital improvement program. He also served as commissioner of finance for New York City.

Preceding his municipal service, Mr. Lhota spent 15 years in investment banking, serving as director of public finance at Credit Suisse First Boston and as managing director at PaineWebber Incorporated, where he specialized in public finance, serving state and local governments throughout the United States.