Doctors at NYU Langone’s Weight Management Program and Weight Management Program at NYU Langone Hospital—Brooklyn may recommend bariatric, or weight loss, surgery for people with severe obesity—defined as having a body mass index (BMI) of 40 or greater—who are having trouble losing weight after trying other treatments for at least six months. Surgery may also be recommended for people who have a BMI of 35 to 39 and an obesity-related condition, such as type 2 diabetes, hypertension, coronary artery disease, severe osteoarthritis, or obstructive sleep apnea. 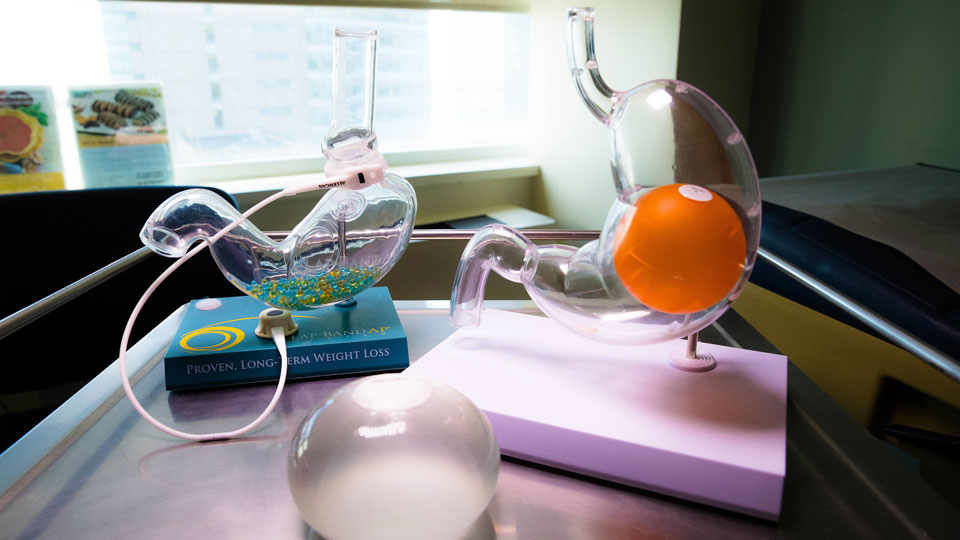 Our surgeons perform most of these procedures in the hospital, using general anesthesia. They specialize in minimally invasive, or laparoscopic, techniques, which involve small incisions in the abdomen and often reduce recovery time. Doctors at NYU Langone also offer a newer procedure, the intragastric balloon system, that does not require general anesthesia or a hospital stay.

Laparoscopic adjustable gastric banding, commonly known as lap band surgery, reduces hunger and the amount of food the stomach can hold. The band also puts pressure on a nerve that wraps around the stomach, called the vagus nerve. This signals the brain that you are full—even after you’ve eaten a small portion of food.

During lap band surgery, the surgeon places an adjustable silicone band around the upper part of the stomach. The top of the stomach is folded over the band and attached to the other side of the stomach with surgical stitches that can safely remain inside the body. The procedure is usually completed in about 45 minutes.

A long tube attaches the lap band to a small, quarter-sized port, which is located just under the surface of the skin of your abdomen. This allows your doctor to tighten or loosen the lap band to ensure that you feel full after eating as you continue to lose weight. To do so, he or she simply injects or withdraws saline through the port. Your doctor makes adjustments to the lap band during monthly follow-up visits in the first 6 to 12 months after surgery. Follow-up appointments take place every 3 months during the second year and every 6 to 12 months thereafter.

Our doctors perform an X-ray test called an esophagram once a year to monitor the position of the band. Before this test, you swallow a liquid contrast material called barium. The barium coats the inside of your gastrointestinal tract, revealing the location of the band on an X-ray.

Additional surgery may be needed if the band is placed too tightly around the stomach, making it difficult to eat and drink, or if the band slips out of place, pushing the stomach upward and causing acid reflux, vomiting, and pain. After surgery, band slippage can occur when people eat too quickly or don’t stop when they’re full. This results in chronic regurgitation, which can dislodge the band.

Lap band surgery is recommended only for people who are able to return for monthly follow-up visits.

Laparoscopic sleeve gastrectomy is another surgical approach that helps a person to feel full after eating a small amount of food. This surgery is recommended for people who cannot return for monthly follow-up visits to adjust the position of a lap band or who have other conditions that require them to swallow large pills.

In this procedure, the surgeon removes 80 percent of the stomach through a small incision, leaving a narrow “sleeve” of gastric tissue. The original football-sized stomach is reduced to the shape and size of a thin banana.

The remaining stomach fills up quickly when you eat. Removing most of the stomach also decreases the production of a hormone called ghrelin, which sends hunger signals to the brain.

Surgery is usually completed in about an hour. Most people remain in the hospital overnight so they can be monitored for complications. Your doctor may recommend a liquid diet for a few weeks after the procedure. Slowly, you can begin to eat solid foods, starting with pureed foods, to allow the stomach to heal.

Gastric bypass surgery is a more complex procedure for reducing the size of the stomach. It can be done using minimally invasive techniques or conventional open surgery. Although it is more invasive, it’s also often more effective than other procedures in achieving and maintaining significant weight loss.

Gastric bypass is also the most effective surgical option for people who have had type 2 diabetes for more than seven years. That’s because over time, type 2 diabetes causes changes in hormones made in the intestines, PYY and GLP-1, which help regulate insulin, blood sugar, and feelings of hunger and fullness.

During the procedure, a surgeon creates a small pouch by dividing the upper portion of the stomach from the lower portion. This pouch, which becomes the “new” stomach, cannot hold as much food as the “old” stomach, limiting the amount of food you can consume. The doctor then connects the new stomach to the upper part of the small intestine so that food can pass directly into the small intestine. This reduces the body’s ability to absorb nutrients and calories from food.

Gastric bypass surgery is typically completed in two hours and requires two to three days in the hospital. Most people can return to normal activities within two weeks. For the first month after surgery, you may be able to eat only very small amounts of liquids and soft foods.

Within about two years, however, the stomach may become softer and begin to stretch, which can allow you to regain the weight you lost. Surgery may be repeated, or lap band surgery may be recommended, to maintain weight loss.

An intragastric balloon system, also known as a gastric balloon, is a temporary device placed in the stomach to reduce space, which helps you feel full. NYU Langone is one of eight training centers in the United States that performs this minimally invasive procedure, which does not require surgery. It is recommended for people who need to lose an average of 20 to 40 pounds.

During this short procedure, a surgeon uses a thin, flexible endoscope—a device with a camera and light at the end—to place the balloon into the stomach through the mouth. When the gastric balloon is in place, it is filled with saline, or salt water, so that it expands into a spherical shape.

You are sedated for the procedure, which takes about 20 minutes to perform. Most people are able to go home after several hours. NYU Langone doctors recommend taking one or two days off from work after the procedure, as many people experience side effects such as abdominal discomfort, nausea, and vomiting during this time. Your doctor provides you with medications to help alleviate these temporary symptoms.

The gastric balloon is left in place for up to six months, during which time your doctors closely monitor you for weight loss and any other side effects. After the device is removed, you continue to work with specialists in NYU Langone’s Weight Management Program for an additional six months to ensure that you have established a healthy lifestyle, which includes eating a healthy diet and exercising. It is possible to have the balloon placed again in the future.

What to Expect After Bariatric Surgery

After any type of bariatric surgery, you may notice a dramatic reduction in your appetite, especially between meals. Because your stomach is unable to hold as much food, you may become full more quickly than before.

Chewing thoroughly and eating slowly enables you to adjust to your stomach’s new limitations. In fact, if you eat too quickly, you are likely to feel sick or even vomit.

Your NYU Langone doctor and nutritionist can offer advice about foods you should eat to optimize weight loss and decrease side effects after bariatric surgery. People who adopt permanent changes in their diet are most likely to maintain weight loss and reduce the risk of obesity-related conditions.