We perform risk-reducing surgery for women who may be at an increased risk of developing ovarian cancer. When possible, we work closely with reproductive specialists and offer fertility-sparing procedures as an option to women who want to have children at a later date.

Our patients share their stories of personalized and comprehensive care for ovarian cancer at NYU Langone’s Perlmutter Cancer Center.

“My relationship with my treatment team helped me manage side effects and complications; with their support, I was able to get through this.”

An avid runner, 29-year-old Lauren from Brooklyn had set her sights on participating in the New York City Marathon with her boyfriend. To be eligible, Lauren had to first complete nine qualifying races and volunteer for an additional race. 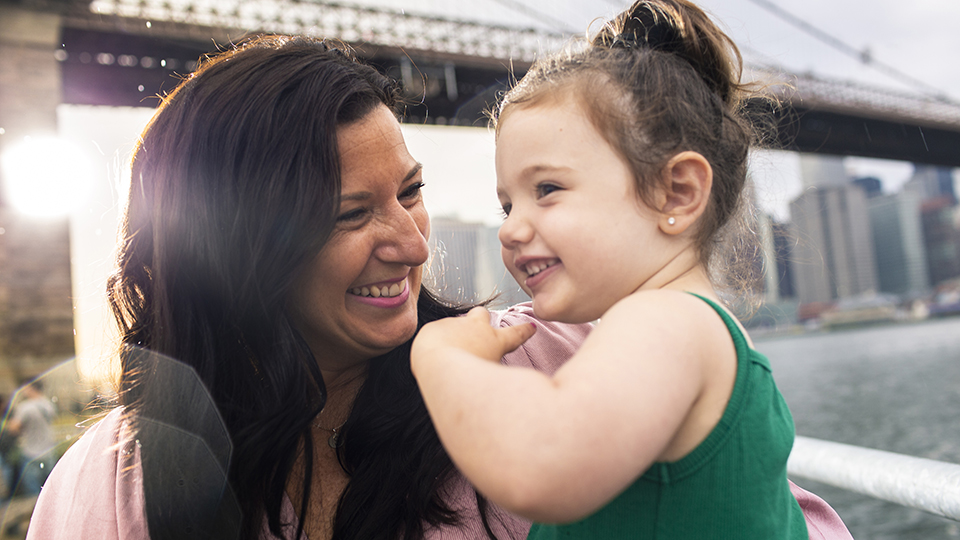 After she completed her seventh race, she had a routine ultrasound to monitor a cyst she had on her ovary for the past three years. The radiologist identified what looked like a tumor on her scans, and an online search led Lauren to Dr. Leslie R. Boyd, a gynecologic oncologist at Perlmutter Cancer Center.

Dr. Boyd took Lauren’s age into consideration while crafting her treatment plan and recommended minimally invasive fertility-sparing surgery to remove the tumor but leave her ovary intact. “I loved Dr. Boyd from the beginning. She is brilliant, confident, and reassuring—those were exactly the traits I needed at that time,” Lauren says.

After the tumor was removed and tested, Lauren was diagnosed with early stage IC ovarian cancer, which meant it had not spread beyond the ovary. “Dr. Boyd personally called me to discuss the results of the biopsy. My diagnosis and treatment were well explained, and I felt taken care of,” she adds.

Lauren had a second minimally invasive surgery to remove lymph nodes and the affected ovary, and two months later, she began nine weeks of chemotherapy. She experienced side effects such as mouth sores and the loss of her hair, but after her last round of chemotherapy, Lauren received the news that she had been waiting for—she was officially in remission.

Lauren knew that she wanted to complete her qualifying races for the marathon. “I had to finish what I had started. Dr. Boyd gave me the go-ahead but urged me to be careful,” says Lauren, who successfully walked the remaining two qualifying races and went on to run in the New York City Marathon the following year. That same year, Lauren married her boyfriend.

After waiting the two years Dr. Boyd recommended to get pregnant, Lauren and her husband now have a baby girl. “I still get anxious about the possibility of a recurrence, but having my daughter has helped a lot in the healing process,” says Lauren, who continues to have yearly follow-up visits with Dr. Boyd.

For others who receive a similar diagnosis, Lauren’s advice is to select a medical provider that has a plan in place and is able to resolve problems when needed. “My relationship with my treatment team helped me manage side effects and complications; with their support, I was able to get through this,” she says.

“I looked around and realized that for the first time in six months, I was no longer a ‘cancer patient.’”

Connie, 46, had always been active and healthy—running and skydiving were her passions—when she received an ovarian cancer diagnosis.

She had no symptoms other than an inflamed lymph node near her groin, which her doctor recommended she have surgery to remove. Three days after surgery, just before the Thanksgiving holiday in November 2008, she learned that the node tested positive for cancer. The cancer was stage IIIC, meaning the cancer cells had spread outside the pelvis to the liver and spleen, as well as nearby lymph nodes.

Connie, who lives on Long Island, saw two different oncologists and both gave her a disappointing prognosis. Her physician then referred her to gynecologic oncologist Dr. Eva Chalas at Perlmutter Cancer Center at NYU Langone Hospital—Long Island. “We hit it off right away. She recommended a treatment plan that seemed most promising,” Connie recalls.

After the initial shock of the diagnosis, Connie was determined to keep living life to the fullest. One of her first questions was if she would be able to continue running and skydiving. Dr. Chalas supported her decision to stay active but recommended she hold off on skydiving until she finished treatment.

Connie likens Dr. Chalas’s approach as a physician to that of a coach. “She would tell me what she recommended and ask if I wanted to follow that protocol. I always felt that I was being spoken to as an intelligent person who had the option to make decisions about my treatment.”

Because Connie received a diagnosis at a more advanced stage, Dr. Chalas suggested a radical hysterectomy, or removal of the uterus, cervix, ovaries, and fallopian tubes, along with debulking, a surgical procedure that involves removing all the cancerous tissue. The extensive, five-hour surgery required Connie to remain at NYU Langone Hospital—Long Island for four days during her recovery. “The quality of care at Perlmutter Cancer Center at NYU Langone Hospital—Long Island is exceptional. The doctors work in partnership with each other, and everyone takes an interest in who you are as a person.”

In January 2009, Connie started a four-month chemotherapy regimen that included intravenous infusion therapy combined with intraperitoneal chemotherapy, in which the chemotherapy is administered directly into the abdominal cavity. Throughout her treatment, Connie continued her part-time job as a business and marketing professional and stayed active, which she says lessened the side effects of chemotherapy. She also took anti-nausea medication before treatment, helping her to manage her diet and nutrition, and avoid excessive fatigue.

After Connie completed her chemotherapy in April 2009, Dr. Chalas gave her the green light to resume skydiving. As Connie took off in the airplane, she was a little nervous but also elated to be back with her friends—and to be given a second chance at life. “I looked around and realized that for the first time in six months, I was no longer a ‘cancer patient.’ Jumping out of the plane that day gave me hope that the worst was behind me and that only blue skies lay ahead,” Connie says.

In November that year, Connie had a cancer recurrence and Dr. Chalas recommended radiation therapy. She completed her last treatment in May 2010 and has been cancer-free since then. In 2012, she successfully completed a phase II immunotherapy clinical trial to help prevent another recurrence. She continues to follow up once a year with Dr. Chalas. “When I go back to Dr. Chalas’s office, it’s like I am visiting my family and not going in as a patient,” she says.

As Connie reflects on her journey, she says setting goals and staying positive helped her finish strong. “Don’t let cancer define you. Live your life and make this experience your own,” she says.