“At NYU Langone, I knew that I could trust my team of doctors and felt confident in their decisions.”

Jin remembers the snowy day in November 2010 when she was working at her computer and felt sharp pain run through her body. “I thought I was having a heart attack,” she recalls. Jin visited the nearest emergency room, and a CT scan showed a lump on her lung. 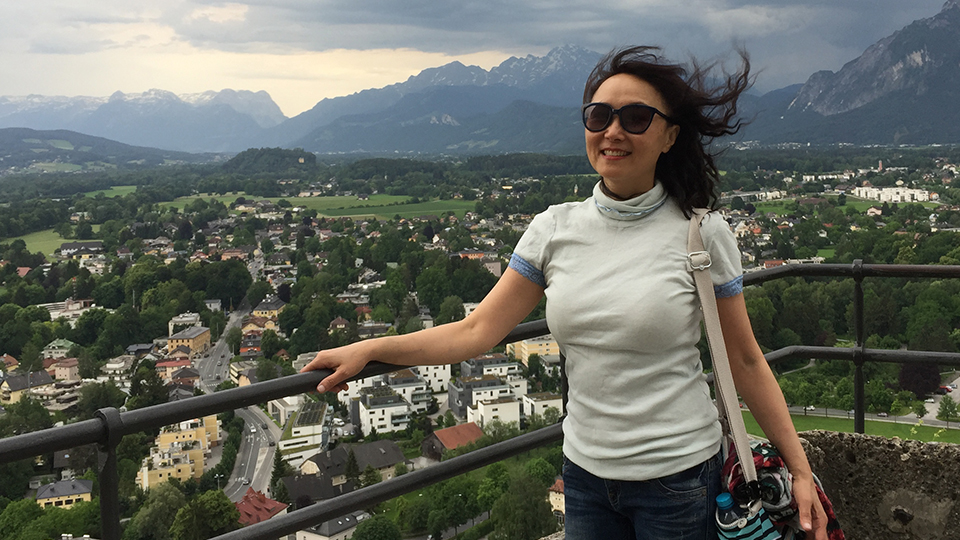 Her doctor referred her to oncologist Dr. Abraham Chachoua at Perlmutter Cancer Center’s Lung Cancer Center, who diagnosed her with stage IV non-small cell lung cancer. Jin, who immigrated to New York City in 1992 from China, was surprised by the diagnosis because she had always been healthy, had no family history of lung cancer, and was a nonsmoker. Though nonsmokers can also be diagnosed with lung cancer, cigarette smoking is the biggest risk factor and accounts for a majority of lung cancers.

Based on the genetic test results from a biopsy, Dr. Chachoua prescribed a targeted drug for her specific genetic mutation. At first, Jin experienced side effects such as fatigue and loss of appetite. She also struggled with the emotional challenges of a cancer diagnosis. But Dr. Chachoua and his team provided the reassurance she needed.

“Dr. Chachoua was so supportive and even gave me his cell phone number—just knowing that he was always available gave me peace of mind,” she says.

Three months later, Jin was relieved when her scans showed that the tumor was shrinking. Eight months after her targeted drug therapy began, Jin had surgery performed by Dr. Harvey I. Pass, who removed the upper left lobe of her lung and the left pleura, a membrane that covers the surface of the lung. “Throughout my treatment, I felt that I was working with a team and not just one doctor. I knew that I could trust them and felt confident in their decisions,” says Jin.

As part of her recovery, Jin took advantage of the support services available at Perlmutter Cancer Center. She visited a psychiatrist to help her manage stress and also saw a speech therapist for help with rebuilding her vocal muscles.

In remission since her surgery in 2011, Jin is now part of a choir group and recently traveled to Vienna for a performance. She continues to see Dr. Chachoua at follow-up visits and also attends weekly lung cancer support group meetings for patients and caregivers. “I recommend NYU Langone to anyone with a similar diagnosis. They saved my life and gave me hope,” she says.

“My team at NYU Langone treated me like a person, not a statistic. They know who I am, not just the lung cancer.”

Ramona, a bookkeeper who lives in Queens with her three children, had been experiencing persistent back pain. In May 2018, the pain became so severe that she could no longer sit at her desk. She made an appointment the next day to see an internist at NYU Langone. Her internist ordered an MRI, which showed bone lesions, and referred Ramona to Dr. Boris Kobrinsky, an oncologist at Perlmutter Cancer Center.

Next came the PET scan. That’s when Dr. Kobrinsky asked her to come see him right away. “As soon as I heard the words ‘lung cancer,’ I started to cry,” Ramona recalls. A biopsy confirmed that she had stage IV non-small cell lung cancer. In addition to the painful tumor on her back, there were eight tumors on her brain.

Fearing the worst, Ramona began to think about all the important moments she would miss—her older children’s weddings, and her younger son’s high school graduation and basketball games.

But then she met with her radiation oncologist, Dr. Benjamin Cooper, at Perlmutter Cancer Center’s Lung Cancer Center. “Dr. Cooper gave me hope and saved my life. He explained my treatment options and helped me focus on what we could do next,” she says.

Ramona received 10 radiation treatments on her back, and neurosurgeon Dr. Douglas Kondziolka delivered 1 session of Gamma Knife® radiosurgery—which releases a precisely targeted beam of radiation—to treat the tumors on her brain. Ramona’s oncologist, Dr. Kobrinsky, also recommended she start immunotherapy, a type of treatment that boosts the body’s immune response to cancer.

During this time, Ramona experienced a complication that required a temporary colostomy—a surgical procedure that creates an opening from the colon through the abdominal wall. The colostomy, performed by an NYU Langone surgeon, required Ramona to be hospitalized for a week. “I was in the beautiful new Kimmel Pavilion building with my own room, and my husband was able to stay with me the whole time,” Ramona says.

Throughout her treatment, she says the nurses and doctors at NYU Langone helped her stay positive and looked after her physical as well as mental health. Although she needed to see multiple specialists, Ramona found it easy to navigate her care. “I love the ease of referrals at NYU Langone. All the doctors have my records, and I don’t have to explain my medical history.”

In September 2018, Ramona began receiving her immunotherapy medication via infusion every three weeks. Now, more than a year into her immunotherapy treatment, Dr. Kobrinsky says Ramona has had a remarkable recovery. While she continues to be on immunotherapy, she is back to her normal daily life. “Thanks to Dr. Kobrinsky and my team at Perlmutter Cancer Center, I’m back at work, and I’m enjoying spending time with the people I love. I even went to Florida for my sister-in-law’s wedding,” she says.