90 Supporters and Counting
0 Days to Go
Give Now

While normally I am a very shy and quiet person, one thing that I am willing to speak up about, is what I believe in, and I believe in FACES (Finding A Cure for Epilepsy and Seizures). I believe that one day there will be a cure for Epilepsy and I think that FACES will help make it happen. My name is Malcolm Winter, I have suffered from epilepsy and seizures for almost 10 years now, I am 21 Years old and I realize that it is time that I try and help make a difference and help their cause.

"Epilepsy is one of the world's most common neurological diseases, but it remains one of the least funded or recognized. Private epilepsy research receives $4 per patient. Parkinson's receives $40 - $50."

Originally I started running not only because I play lacrosse, but because I cant drive due to constant petite-mal and reoccurring grand mal seizures. I started walking and then running to my friend's house, and the distance didn't bother me. I was willing to run and walk anywhere. I came to love running and I now plan to run The Boston Marathon and if I think it can help spread awareness about epilepsy and FACES, then I believe thats what I not only should do... It's what I have to do.

While training to run the Boston Marathon on April 20th, I decided to also sign up for the NYC Half Marathon on March 15th. My love for running will now allow me to spread epilepsy awareness twice this year – first in New York City and then in Boston. I look forward to both races and hope to raise money and spread awareness while training for each one.

I believe too many people are unaware of what someone like me has to go through on a daily bases, constant medicine changes/side effects and its just not fair for people like me not to get a chance, a chance for a cure like any other disorder. I believe in FACES and I know that there will be a cure for epilepsy.

I ask that you please donate to my running campaign! My goal is to reach $2,500 right after my NYC Half Marathon by March, and continue to fundraise through March up to my Boston Marathon in April. 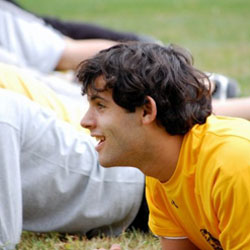