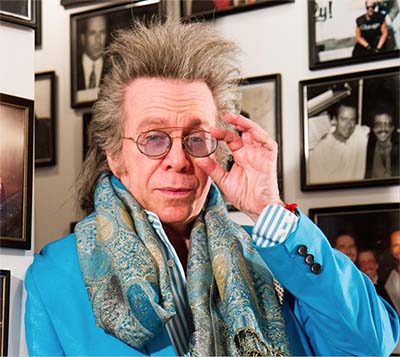 How are you feeling?
It’s seven weeks, and I’m just feeling back to myself. That’s how hard it hit me. Much worse than my heart attack—I had what’s known as a widow maker, had a stent put in—I was back on stage in five days. This feels like I was beaten over every part of my body.

What happened?
I started to have full body pains, every place you could image. Nausea, from morning to night, no matter what I took. At first, I wasn’t sure if I had fever or not because, foolishly, I had what must have been one of the first thermometers ever invented. Something my great-grandmother might have used in Russia. But at one point, my chills were so bad I couldn’t hold a glass. My doctor told me I should be in the hospital.
I called 911. Two amazing ambulance workers—one of them was so kind, he took my hand and said: “Don’t worry, you’re going to be okay.” I remember them apologizing to me for the bumpy ride. Next thing I know I’m in the ER.

How was your experience at NYU Langone?
I must emphasize that every single person there was so kind. The cleaning people, transport, nurses, doctors… everybody—everybody that came into the room had something to do with me getting better.
They kept bringing me ice packs, as many as I asked for, to bring down my fever—when it finally hit 98.6, it brought tears to my eyes. I couldn’t believe it. That happened to me several times while I was there. I teared up a lot because the concern from the staff was overwhelming. There were nurses that held my hand that told me I’d be okay, and just to hang in there. They were working very hard to get me better.

Why did you make your gift to support COVID-19 care and research?
Because I believe in gratitude. Be grateful no matter what’s going on—those people are going out of their way, they’re so brave. To show up every day knowing that you could catch this, that’s an amazing thing. My gratitude is endless.

Some people haven’t been feeling seriously ill. Why should they consider a contribution?
You don’t need to have a disease to contribute. The same way that people come out to applaud and cheer—out the windows, on the rooftops—many of those people are probably not sick, they’re just grateful that there are people out there who are trying to help. I think there’s a feeling of camaraderie. Serve your community and the world in general.

Is laughter the best medicine?
I’m one of the few doctors who has a longstanding career in comedy. There’s no question that laughter releases endorphins. When I had my heart attack, and they were working to place the stent, I was still awake and felt what they were doing. On the operating table, I was joking to the surgeon: “I feel you in my heart, and not in a romantic way.”Even in that situation, I was looking for the humor. It’s about being positive. I try to open my mind to all positive things because it can’t diminish you to do so.

Jeffrey Gurian is a comedian/comedy writer, radio personality, author, producer, and journalist. He also trained as a Cosmetic Dentist and served previously for 12 years as a clinical professor within the Oral/Medicine/Oro-Facial Pain Department of New York University’s College of Dentistry. Follow him on Twitter and Instagram @jeffreygurian