Our locations are open for all appointments and procedures, including COVID-19 testing. Schedule an appointment online or call your doctor’s office. Patients may now be accompanied by visitors. Read our updated visitor policy.

In the time of COVID-19, the distance most people have in mind is 6 feet. But long-distance runner Alex Eisen of Mineola, New York, had his eyes set on a much longer length: 30 miles. 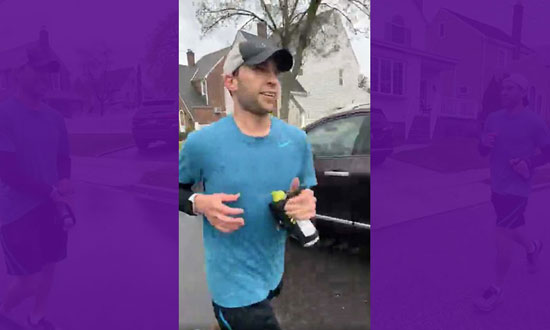 To ring in his 30th birthday, Alex knew he wanted to support the frontline clinicians, nurses, and staff of NYU Langone Health and NYU Winthrop.  As a thank you to tireless efforts of the healthcare workers, he would set up an online campaign around the most grueling distance he had ever attempted—30 miles around Mineola and neighboring Port Washington, where he teaches fourth grade. He would make the journey on his birthday.

When the pandemic hit, he immediately knew he wanted to help, and NYU Winthrop was top of mind. Winthrop had helped Alex in the past—living with asthma, he needed emergency services at points throughout his life. “It’s near and dear to my heart.”

Early on April 21, he set out even as the forecast called for rain (and, oh, it rained; though he narrowly beat the afternoon tornado warnings for Nassau County.). And, with a little help from his in-house camera crew—brother behind the camera, mother behind the wheel—he livestreamed the entire event on Facebook, raising thousands of dollars over the course of the run to help battle the coronavirus.

“I’ve been trying to get my friends to join me [on a race]. One of them said he’d do the last .2 if I could handle the first 26” (typical marathons are 26.2 miles). But on the 30-mile run, Alex wasn’t alone; over 150 donors cheered him on with contributions of all sizes. As of this writing, his campaign has raised over $12,000. Additionally, his story was picked up by local news—even further extending his reach. Watch coverage from ABC7 here.

Post-run, life didn’t take long to get back to (quarantine) normal. Sore and hobbling at 8am the following day, he returned to his students online: “I basically told them, ‘If I’m going to be there, I expect you to, too.’” And that’s how you teach dedication.